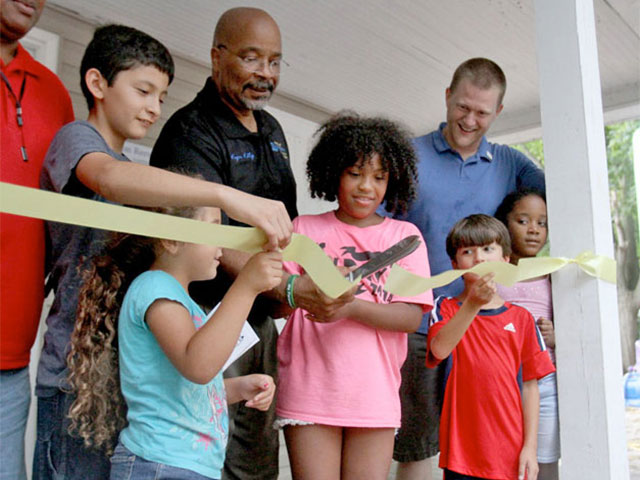 Story by Joe Warner from NJ.com

BRIDGETON — Rain wasn’t enough to stop a new generation of children from enjoying the long-awaited reopening of Johnson Reeves Playground.

On Thursday afternoon, city officials and residents joined together in the pouring rain to cut the ribbon for the revived Johnson Reeves Playground on East Avenue and York Street.

Mayor Albert Kelly and several other city residents reminisced about their childhood summer days spent at the park, sliding on the hot, metal playground equipment and playing baseball before breaking away for lunch and then coming back to play until dinner.

The renovations began with updating the playground equipment and clubhouse and later expanded to include an adjustable basketball hoop, lighting, a youth soccer field, and handicapped accessible parking. Future phases include new fencing.

The project funding was aided by Lowes of Millville donating materials and labor for the roof, R&S Construction of Bridgeton donating a portion of labor and materials for building renovations, and a $15,000 grant from KaBoom and Dr. Pepper/Snapple for the playground apparatus.

On-site labor support came from Ranch Hope and the Pascale Sykes Foundation-funded collaborative “Unidos para la Familia.” The final piece of the puzzle was provided by Bridgeton’s own Public Works Department, which handled much of the installation for basketball and soccer.

Joe Warner may be reached at jwarner@njadvancemedia.com.

Title of the document